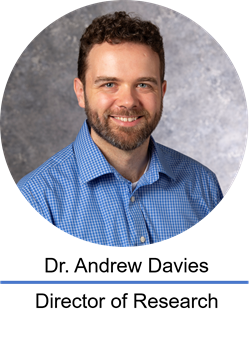 Dr. Andrew Davies joined the Deason Criminal Justice Reform Center at SMU Dedman School of Law as the Director of Research where he develops and directs ongoing and new criminal justice initiatives. He is a social scientist specializing in research on indigent legal services and the criminal justice system. Dr. Davies comes to the Deason Center from The Office of Indigent Legal Services in Albany, New York, a state office that assists county governments and indigent legal services providers. There, he oversaw data collection and research for the office. He is the co-founder of the Indigent Defense Research Association (IDRA), a national organization dedicated to data-driven research of the indigent defense function.

Prior to working in Albany, Dr. Davies was a Research Associate at the New York State Defenders Association. He has received degrees from Oxford University (BA Modern history, 2002; MSc Criminology, 2004) and the University at Albany School of Criminal Justice (MA, 2006, PhD 2012).

Dr. Davies is a prolific scholar and has published over thirty pieces including journal articles in Law and Society Review, Justice Quarterly, the Ohio State Journal of Criminal Law, and the Albany Law Review. He has also received large national grants on access to counsel and quality legal representation from the National Institute of Justice, the Bureau of Justice Statistics, and the National Science Foundation.

Professor Pamela Metzger, the Director of the Deason Center, said, “Dr. Davies is among the nation’s top criminal justice researchers. He is a pioneer in the growing field of multi-site, data-driven, and evidence-based indigent defense research. He brings with him the substantial experience of nearly a decade of work in the field.”