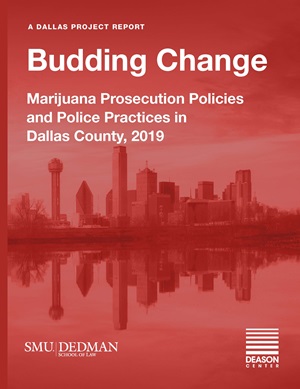 Key points from Budding Change include:

Future reports will be released regularly throughout the summer and can be found at DeasonCenter.org. For media interviews, contact Lynn Dempsey at ldempsey@smu.edu or 214-768-8617.

SMU Dedman School of Law was founded in 1925. With more than 17,000 alumni from more than 80 countries, it enjoys a national and international reputation of distinction. SMU Dedman School of Law is known for its academic rigor, as well as its excellent record in preparing students to practice in prestigious law firms, major corporations, and public service organizations. The faculty excel in their public engagement efforts, groundbreaking scholarship, innovative teaching, and international impact. The law school boasts eleven legal clinics and three academic centers with programs making an impact in the community and nationwide. SMU Dedman School of Law ranks as a top law school by National Jurist/preLaw in Business Law, Criminal Law, Family Law, Intellectual Property Law, Tax Law, and Human Rights Law. It is ranked #30 by National Law Journal/Law.com for having the highest percentage of 2019 graduates in associate jobs and #20 for the highest percentage of 2019 graduates promoted to partner at the nation’s 100 largest law firms. It also has one of the country’s oldest LL.M. programs for graduates of foreign law schools, a program initially launched in 1949.