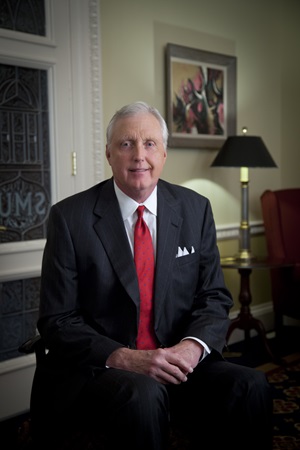 David B. Miller is a businessman, philanthropist, and a two-time graduate of SMU whose generosity and leadership over the past three decades have helped transform the University and surrounding Dallas community into an engine of entrepreneurship and innovation.

Miller’s career began with Republic National Bank of Dallas in 1973, where he worked as vice president and manager of Republic Energy Finance Corporation. He later founded and served as co-chief executive officer of the Denver-based oil and gas company, MAZE Exploration Inc.

In 1988, Miller co-founded EnCap Investments, L.P., a leading provider of private equity to the energy industry. He continues as its managing partner today, and through his leadership, has helped build EnCap into one of the 20 largest private equity firms in the world.

It is his philanthropy, however, that has made the most impact for SMU and Dallas. Last year, he and his wife, Carolyn, donated $50 million to the Edwin L. Cox School of Business, which served as a capstone to their decades-long commitment that has fueled the University’s rise. He has served on the SMU Board of Trustees since 2008. In addition, he is on the Board of Directors for the George W. Bush Foundation, Goodwill Industries of Dallas, the DFW Salvation Army, Methodist Health System Foundation, and the UT Southwestern Medical Foundation.

Miller graduated from SMU with his bachelor’s in 1972 and his master’s in 1973. Other Miller family members, including his son, stepson, and two nephews are also SMU alumni.