Report of the Investigative Commission of the Northern Frontier 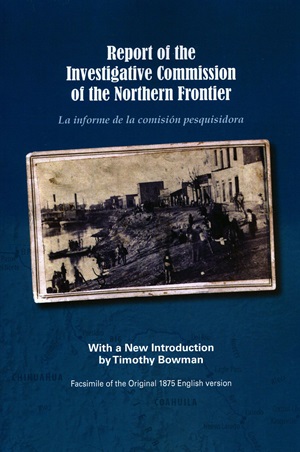 With a New Introduction by Timothy Bowman

Facsimile of the Original 1875 English version

“Timothy Bowman has done a great service by making this seminal report available to a new generation, and his lucid notes and introduction make it accessible for specialists and general readers alike.”

“At long last, the most important single document for the study of the U.S.-Mexico border has been republished.”
Benjamin Heber Johnson, author of Revolution in Texas:  How a Forgotten Rebellion and Its Bloody Suppression Turned Mexicans into Americans (Yale University Press, 2003)

“Anyone desiring a thorough and objective understanding of the often confusing history of the Texas-Mexico border in the nineteenth century will want this indispensable book. “
Jerry Thompson, author of Cortina: Defending the Mexican Name in Texas (Texas A&M University Press, 2007)