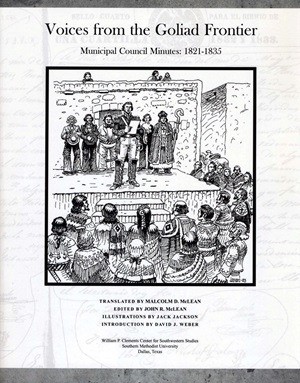 With a foreword by David J. Weber

Winner of the 2008 Clotilde P. Garcia Tejano Book Prize
and the Sons of the Republic of Texas Presidio la Bahia Award!

“One of the most important discoveries in documentary materials for Texas history to be published at the start of this new century. It will influence scholars to re-evaluate earlier conclusions of the tensions in the 1830’s that culminated in Texan Independence.”

“Voices from the Goliad Frontiermakes the minutes of the municipal council of the Texas-Mexican community of Goliad readily available to researchers for the first time.  It will be an essential source for historians who write about the politics, economics, culture, or society of the community as well as for those who write about Mexican Texas in general.”