Chapters in the History of Organized Labor in Texas 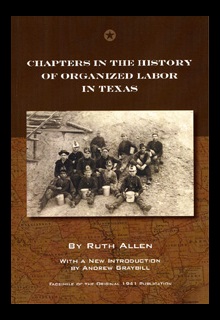 By Ruth Allen with a new introduction by Andrew Graybill

Facsimile reproduction of the original produced in a limited edition of 150, including new introduction and illustrations.

RUTH ALLEN (1889-1979), the pioneering labor historian of Texas, taught economics at the University of Texas-Austin from 1923-1959 and was the author of several influential books and numerous scholarly articles on the late-nineteenth and early twentieth-century labor movement in Texas.

ANDREW GRAYBILL has taught at SMU since 2011 and serves as the Director of the William P. Clements Center for Southwest Studies, as well as a professor in the Clements Department of History. Graybill is a historian of the North American West, with particular interest in continental expansion, borders, race, violence, and the environment. He is the author or editor of four books: Policing the Great Plains: Rangers, Mounties, and the North American Frontier, 1875-1910 (Nebraska, 2007); Bridging National Borders in North America: Transnational and Comparative Histories, which he co-edited with Benjamin Johnson (Duke, 2010); The Red and the White: A Family Saga of the American West (Liveright, 2013); and Civil War Wests: Testing the Limits of the United States, which he co-edited with Adam Arenson (California, 2015).

"With this slender volume, Ruth Allen almost single-handedly created the field of Texas labor history, and she did so with a verve and passion rarely seen in scholarly writing.  It may be a cliché to say that a book was "ahead of its time," but if ever the term applies, it is in this case."
Gregg Cantrell, Erma and Ralph Lowe Chair in Texas History Texas Christian University

"I am delighted that Ruth Allen’s classic history of labor in Texas is back in print. Even though some of her research has been superseded and her views on race are dated, it was through her efforts in the 1930s and 1940s that many labor records were preserved. Scholars of Texas labor history still consult those records, along with her monographs. Ruth Allen created the field of labor history in Texas and now, with the publication of this book, a modern audience can appreciate her achievement."
George N. Green, Professor of History, University of Texas at Arlington