The History of the Clements Center 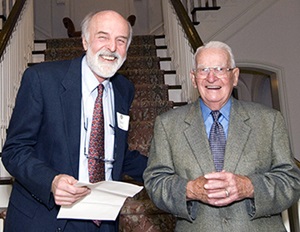 Weber taught at SMU from 1976-2010, and was the leading scholar on the history of the Spanish presence in North America, with particular attention to the region that became the American Southwest.  He was the author or editor of more than seventy articles as well as twenty-seven books, including The Spanish Frontier in North America  (Yale, 1992), and Bárbaros: Spaniards and Their Savages in the Age of Enlightenment (Yale, 2006).  In recognition of his contributions to the study of their nations, the governments of Spain and Mexico conferred upon him the highest honors they grant to foreigners.

Weber found common cause with Bill Clements, a native Texan long fascinated by the history and culture of the Lone Star State and the greater Southwest, who had assembled an extensive personal library as well as a renowned collection of Texana.  After conversations with Weber, the SMU history department, and university administrators, Clements made a substantial gift to SMU that established the research center that bears his name as well as an innovative Ph.D. program initially focused exclusively on the Southwest.  The William P. Clements Center for Southwest Studies opened its doors in 1996, and the first doctoral students enrolled in 1998.

Governor Clements was the founder of SEDCO, one of the world’s largest drilling contractors.  He was U.S. Deputy Secretary of Defense (1973-1976), and served twice as governor of Texas (1979-1983 and 1987-1991), the first Republican chief executive since Reconstruction.  His ties to SMU extended over many years, and included the acquisition of the university’s Fort Burgwin campus near Taos, New Mexico, which hosts students in the summer and winter for academic work across a range of disciplines, from history to the life sciences and much in between.