We analyzed C2135, the proposed US Congressional map being considered by the TX House (as SB6). Unfortunately, it's just as bad as C2101.

C2135 is (1) egregiously gerrymandered to reduce the competitiveness of nearly every congressional district, and (2) manipulated to give the Republican Party, in particular, an outsized advantage, completely unlike any plan in our unbiased ensemble. The result is that nearly every district (both Republican AND Democratic) is uncompetitive in a general election, and that among these there are far too few Democratic districts, given the actual political leanings of Texan voters. Finally (3) minority voters are “cracked and packed” into a few overwhelmingly minority districts, at the cost of decreasing the total number of districts which would allow minority communities to elect candidates of their choice. Read our full statement here.

We have House results!!

We finally have ensemble results for the TX House of Representatives. See TXGerryWatch for more. 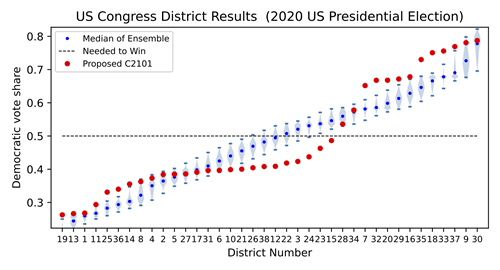 We applied our methods to the Congressional maps that have been made available by the Texas Legislative Council. As of 9/30/21, we had seen 5 maps posted: C2101, which was submitted by Sen. Huffman (R), and C2102, C2103, C2104, and C2105, submitted by members of the public. We generated a table of two important statistics that are commonly used by political scientists to assess partisan gerrymandering: the mean-median score and partisan bias score. By these metrics, C2101 is shockingly gerrymandered, with scores that are are not even close to the most extreme numbers found in our ensemble. Only 3 out of 38 districts could reasonably be considered to be competitive in a general election. Read our full statement here.

We have a new analysis of two maps proposed for the TX Senate. We submitted our analysis to the comment portal for the Redistricting Committee. Will they read it?

MUM_TX: Our analysis shows that PLANS2101 is clearly gerrymandered

In testimony to the House Redistricting Committee on Saturday, member 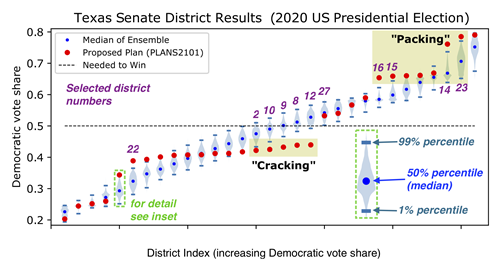 s of Math For Unbiased Maps TX (MUM_TX) urged legislators to ensure that any enacted map “best reflects both the demographics and political will of the citizens of Texas”. Unfortunately, PLANS2101, the proposed redistricting plan for the Texas Senate that was filed on Saturday, does exactly the opposite. It is a highly gerrymandered plan that significantly reduces competitiveness of its districts.  Instead of enabling voters to choose their legislators, therefore, it serves to protect those legislators from accountability to their voters.