How gerrymandered were the maps that came out of the TXLege session? How about the ongoing redistricting for the Dallas City Council?

We report...you decide! We are reporting on the Dallas City Council, US Congress, Texas Senate, and Texas House. Use the sidebar to see basic metrics and links to detailed analysis.

The following plans have been submitted to the public gallery at DistrictR. See Dallas Redistricting for more information on the plan submission process. 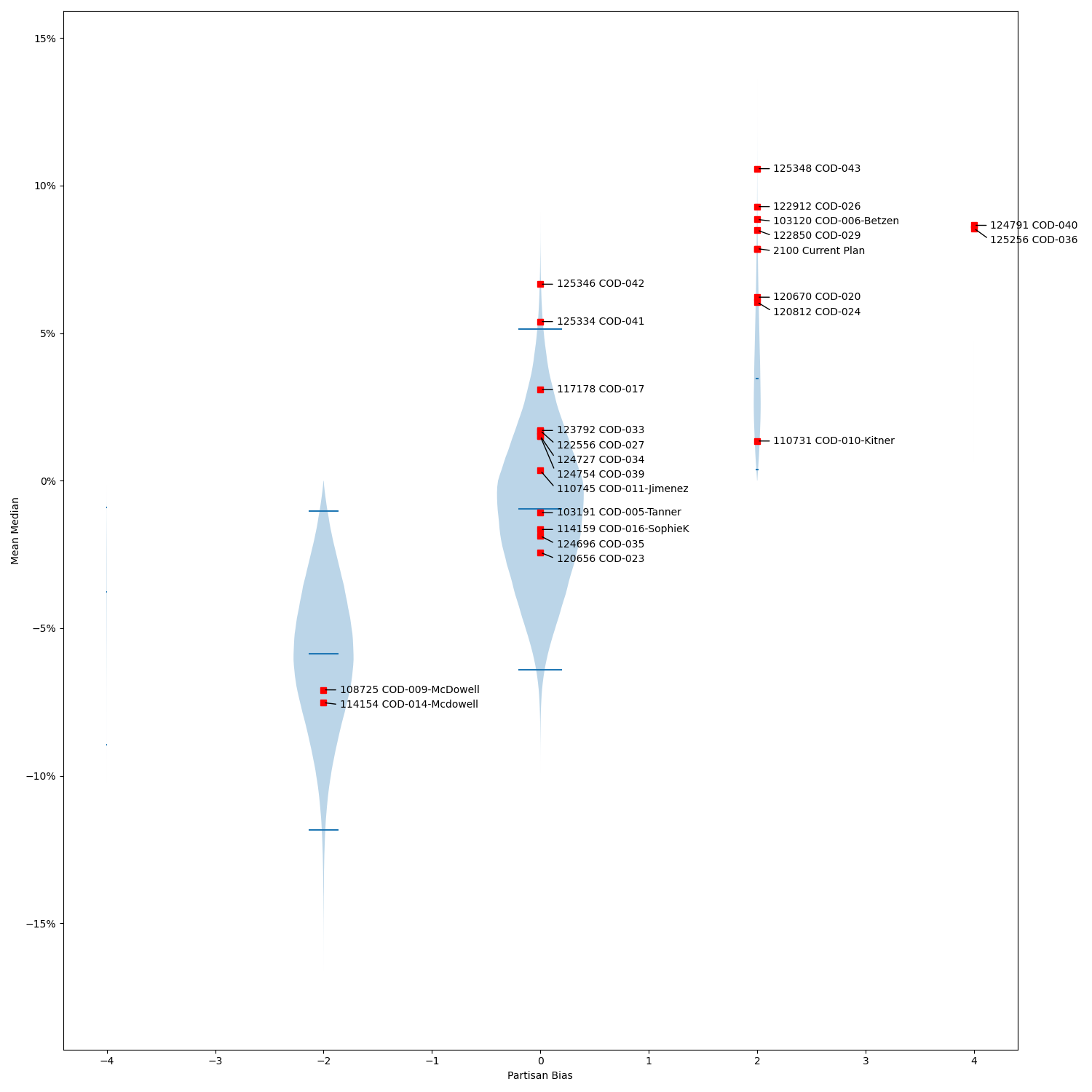 As of 10/17/21, 59 plans/amendments have been filed on the Texas Legislative Council website.

As of 10/17/21, 127 plans/amendments have been filed on the Texas Legislative Council website.

All TX Senate, US Congress, and TX Congress plans introduced and filed with the Texas Legislative Council as of 10/17/21. Each node contains the number of the plan and the last name of the legislator that introduced it. Node color: party affiliation, if applicable. Light colors indicate the plan has been superseded by an amendment offered by the same individual. Directed arrows: Indicate the target plan is an amendment of the source plan. Arrow numbers:  the number of Census blocks that switched districts between the two plans.  There are a total of about 900,000 Census blocks in Texas.

Favors = Does the map favor one party relative to another, compared with the ensemble? Possible values: D/R/N (neutral)/NA (not applicable)

2D (# of total) = number of ensemble plans that score worse on both MM and PB, or are equal on PB and worse on MM. We only assessed plans which favored one party over another on both PB and MM; e.g. in contrast S2100 favors Republicans slightly on MM, but is neutral on PB.

For integer-valued quantities such as partisan bias, the percentile value is sensitive to the exact definition. We used an average between the between the "weak" and "strict" definitions (i.e. "less than or equal to" and "strictly less than"), as implemented in the SciPy stats package (stats.percentileofscore(kind='mean') ).

We generated an ensemble of legal plans (1,500,000 for US Congress, 617,270 for TX Senate, 1,000,000 for TX House, and 9,589,284 for Dallas City Council) using Markov Chain Monte Carlo algorithms as implemented in GerryChain (MGGG, 2018). Data was compiled from the Census Bureau (population data and geographic units) and the Texas Legislative Council (election returns from the 2020 Presidential and US Senate races).  Proposed plans were obtained from the Texas Legislative Council (US Congress, TX Senate, and TX House) and DistrictR (Dallas City Council). Each plan was assessed on a variety of partisan metrics; the range of observed values in the ensemble is then used to assign a percentile value to each metric as computed for each proposed plan.