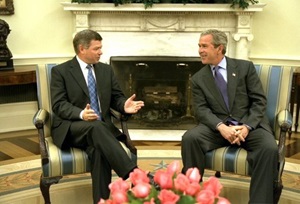 NOTE: This interview--including both video and transcript--will be available to the public in late 2022.

Kjell Magne Bondevik first served as Norway’s Prime Minister between 1997 and 2000, leading a coalition government that included his Christian Democratic Party (KrF). He returned to head another coalition government between 2001 and 2005. Mr. Bondevik is an ordained minister of the Lutheran Church of Norway. He is currently the president of the Oslo Center for Peace and Human Rights.

To learn more about this interviewee, please consult the links below.

The CPH thanks SMU student intern Polina Declue for her research and work in compiling this collection of additional resources.