The HRF provides a year of in-depth mentorship to some of SMU’s most exceptional students as they target critical issues through novel applied research and social innovation projects. It is the most prestigious human rights honor offered at SMU. Any SMU undergraduate or graduate student can become an HRF, although human rights majors and minors are especially encouraged to apply. Diversity in cohort backgrounds and project topics is prioritized in the selection process, which includes consideration of project proposals, written essays, and personal interviews.

Since 2014, 36 HRFs have contributed approximately 10,000 hours of service to the City of Dallas and surrounding region. 32 of these HRFs have identified as women and 23 as students of color. HRF alumni have gone on to attain law, medical, and graduate degrees at top institutions, as well leadership positions in the corporate world, nonprofit organizations, and the public sector. 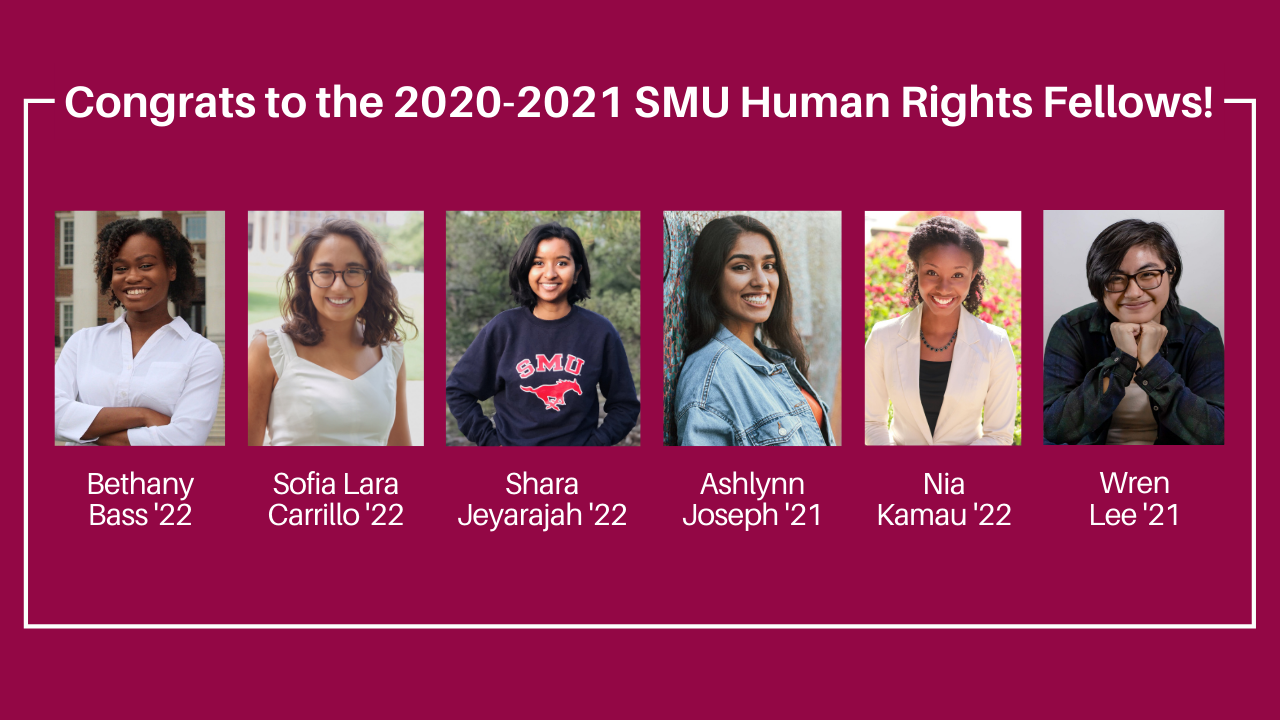 Sanaa Ghanim: Sanaa was a fourth-year undergraduate majoring in Human Rights and English and minoring in Arabic. She pursued an applied research project to measure, analyze, and critique the role of education in shaping perceptions of the longstanding Israeli-Palestinian conflict. Her project culminated in the publishing of a curriculum guide to assist educators in teaching effectively and accurately about the conflict at the high school and college levels.

Cindy Hua: Cindy was an MA candidate in Sustainability and Development with a specialization in Sustainable Global Development and Design in the Lyle School of Engineering. She implemented a STEM outreach program and education curriculum titled "STEM+Z: The Making of an Undead Apocalypse." Through a project-based storyline based on the pop culture theme of zombies, STEM+Z engaged Dallas high school students in combating environmental justice issues and promoting sustainable urban development.

Marie Joung: Marie was a fourth-year undergraduate majoring in Biological Sciences and minoring in Women's and Gender Studies. She organized "The Period Project," a student-led initiative to provide free menstrual products (pads and tampons) through the installation and upkeep of wall dispensers in all women’s bathrooms on the SMU campus. Using a communication and social media campaign, the initiative shared its research findings and strategic planning with other groups seeking to promote increased public access to menstrual products in schools, institutions, and businesses.

Lamisa Mustafa: Lamisa was a third-year undergraduate majoring in Human Rights, Sociology, and Public Policy and minoring in French. She organized "We The Students," a first-of-its-kind community symposium held at SMU in the spring of 2020. The symposium built a coalition of student-activists from colleges across North Texas focused on promoting human rights-centered policy and accountability measures in higher education.

Myca Williamson: Myca was an MBA student in the Cox School of Business. She created an accessible, data-driven online platform that highlights and supports the financial journeys of Black people from all parts of the wealth spectrum. The site integrates multimedia stories and educational resources related to financial literacy, generational wealth, innovative entrepreneurship, and socioeconomic inequality.

Averie Bishop: Averie was a fourth-year undergraduate majoring in Human Rights and Sociology and minoring in Law and Legal Reasoning (as a Pre-Law Scholar). She produced a peer-constructed and peer-led sexual education video series called Get SexEd!, for and by women of color, using the YouTube platform.

Neha Husein: Neha was a fourth-year undergraduate studying Human Rights and Marketing, and minoring in Advertising and Sociology with a nonprofit focus. She developed a mobile application called Just Drive (now available on iOS and Android), which incentivizes safe driving and reduces texting on the road by providing rewards for use at local businesses.

Rachel Mumaw: Rachel was a fourth-year undergraduate majoring Human Rights and Biological Sciences and minoring in Religious Studies. She completed the first-ever nationwide survey of individuals who identify as both Christian and LGBTQ+ in order to provide spiritual resources and built virtual communities through a new data-driven website called Word of Love.

Sadiya Patel: Sadiya was a fourth-year undergraduate majoring in Human Rights and International Studies with a focus on Asia and minoring in History and Women's and Gender Studies. She authored a curriculum designed to educate young women in faith communities about issues of sexual assault prevention and advocacy.

Benjamin Chi: Ben was a fourth-year undergraduate student majoring in Biochemistry and Health and Society. Ben worked with homelessness advocates, state government officials, healthcare specialists, and youth experiencing homelessness to change the Texas Family Code so that minors without guardians could consent to their own vaccinations and medical care, thereby allowing them to attend school and improving public health.

Greg Guggenmos: Greg was a third-year undergraduate majoring in Applied Statistics and Data Analytics and minoring in Computer Science and History. Greg launched his own nonprofit, the Dallas Community Bail Fund, which provided grants to indigent defendants awaiting trial in the Dallas County justice system and drew from best practices of organizations in other cities such as the Brooklyn Community Bail Fund (which Greg visited as part of a Richter Fellowship).

Tiffany Jelke: Tiffany was a Human Rights BA alumna and first-year MLS student focused on Human Rights and Social Justice. Tiffany produced titled "Refugee Stories: In Their Own Voices" under the auspices of her own human rights multimedia company while working as an Advocacy Associate with the International Rescue Committee on pro-refugee and pro-immigrant education and legislation.

MacKenzie Jenkins: MacKenzie was a fourth-year undergraduate majoring in Human Rights and International Studies and minoring in Arabic and Public Policy and International Affairs. MacKenzie partnered with Dallas County judges Shequitta Kelly, Amber Givens-Davis, Lisa Green, and Stephanie Mitchell on their initiative called Pipeline to Possibilities: A Look Into Educational Equity and Discipline in Dallas ISD, an educational outreach program for at-risk middle and high school students that seeks to disrupt the school-to-prison pipeline for at-promise middle and high school students.

Angela Wang: Angela was a fourth-year undergraduate majoring in Biochemistry and Human Rights. In addition to interning with the Dallas Area Rape Crisis Center as a Sexual Assault Advocate, Angela is created a toolkit for friends and family of survivors of sexual assault and sex trafficking called "Wait, I Can Actually Help??" that integrated interviews with experts and survivors, data demonstrating the importance of early intervention, and proven cognitive behavioral techniques.

Dominique Earland: Dominique was a fourth-year undergraduate majoring in Human Rights and Biology and minoring in Biomedical Anthropology. She worked with the Dallas County Fetal-Infant Mortality Review (FIMR) of Parkland Hospital to teach healthcare rights and ensure the provision of appropriate services to mothers and babies at risk due to socioeconomic status, lack of citizenship documentation, or age.

Suzanne Massey: Suzanne was an MA candidate in Sustainability and Development, as well as an SMU administrator. She worked with Kids-U and the Injury Prevention Center of Greater Dallas to implement a PHOTOVOICE project in the Forest/Audelia neighborhood where youth will be taught to use art in increasing community safety and disrupting cycles of violence and poverty.

Kate Moody: Kate was a fourth-year undergraduate majoring in Human Rights and International Studies and minoring in Public Policy and International Affairs. She completed an independent applied research project by gathering comprehensive data on the cost effectiveness of the death penalty in Dallas county, with the goal of renewing dialogue around effective criminal justice procedures.

Syed Rizvi: Syed was a fourth-year undergraduate majoring in Human Rights and Political Science and minoring in Arabic. He coordinated with major mosques in the Dallas area to integrate and teach human rights modules within their Islamic religious education curricula for children.

Stephanie Staton: Stephanie was an MDiv candidate seeking ordination in a Christian denomination. She organized two local United Methodist church congregations – Kessler Park and White Rock – to create a leadership and dialogue training program bringing together members of the congregations and refugee neighbors recently resettled to the area.

Samantha Butz: Samantha was a third-year undergraduate majoring in Fashion Media and Advertising and minoring in Graphic Design and Photography. Drawing on support from faculty at the Meadows School of the Arts, Samantha cataloged SMU apparel practices, created a grassroots campaign advocating for worker rights in the garment industry, and worked with SMU administrators to update all university purchasing standards with non-negotiable human rights guidelines.

Vanna Ngo: Vanna was an MLS student focusing on Human Rights and Social Justice. Working with the SMU Residential Commons, Vanna created a restorative justice curriculum to motivate constructive dialogue across and around difference, increase student investment in community health and safety issues, and provide an alternative conflict resolution platform in the SMU Residential Commons.

Sandra Ostad: Sandra was an MLS student focusing on Human Rights and Social Justice and Global Studies. Interning with the International Rescue Committee, Sandra facilitated their citizenship education curriculum, assisted with development campaigns, created a volunteer training structure, and wrote a successful grant proposal for the United States Citizenship and Immigration Services agency which alloed the Dallas office of the IRC to significantly expand its citizenship instruction and naturalization application services.

Daryl Parker: Daryl was an MLS student focusing on Human Rights and Social Justice and Creative Writing. Daryl built on his background as a Marine and police officer to launch a new nonprofit organization, Actual Innocence Review, which conducted criminal investigations in cases of wrongfully convicted persons and successfully won a new judicial hearing for Gustavo Mireles, a man who has been in prison on a murder charge for fifteen years.

Anna Norkett: Anna was a third-year undergraduate with majors in Economics and Public Policy and a minor in Business Administration. She worked as Project Leader for College Bound Dallas to administer a tutoring and mentoring program for underprivileged high school students and raise awareness of education inequality in the United States.

Amanda Steinke: Amanda was a fourth-year undergraduate with majors in Environmental Engineering and Human Rights. In conjunction with the Lyle Engineering in the City program, she facilitated a 1200 square foot aquaponics project at St. Philip's School and Community Center in south Dallas, an area identified as a food desert.

Karma Orfaly: Karma was a fourth-year student with majors in Human Rights and Political Science and a minor in Law and Legal Reasoning. She worked with Ma’Ruf Dallas, a Muslim social justice and refugee service organization, to serve as a translator, educator, and service provider with Syrian recently relocated to the United States.

Ketetha Olengue: Ketetha was a fourth-year undergraduate with majors in Computer Science and Chemistry and a minor in Mathematics. She led grassroots campaigns and built international relationships as a Social Media, Communications, and Development specialist with Minga Peru.

Shelbi Smith: Shelbi was a fourth-year undergraduate with a major in Human Rights and minors in Women’s and Gender Studies and History. She worked with Human Rights Initiative of North Texas to provide legal assistance to refugees and immigrants who were victims of human rights abuses.