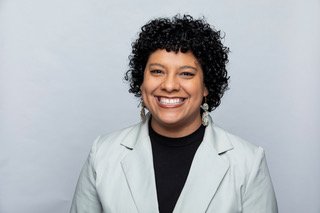 Graduate Student in Religion and Culture

Yolanda M. Santiago Correa is a doctoral student in the field of Religion and Culture. She was born and raised in Puerto Rico as the only daughter of two Methodist ministers. She holds a Bachelor of Arts in Psychology from the Universidad Interamericana de Puerto Rico and an M.Div. from Duke Divinity School.

Her history as an Afro-Puerto Rican woman and her status as a member of the diaspora led her to Ph.D. work that seeks to raise the voices of the oldest colony whose name is only remembered for passport-less vacations. Yolanda hopes to explore the Afro-Puerto Rican and Afro-Latinx identities and their relationship with religion, particularly Christianity, to answer the what, the how and the why: What does it mean to accept "Africanity" in a colonial nation that continues to be under the power of the United States, a white-dominated empire? How do we reconcile the colonial of Christianity and the colonial history of Puerto Rico in the bodies of black and brown Puerto Ricans? Why is blackness/"Africanness" taboo? How is this heritage seemingly erased but silently present in our worship and beliefs? Why is lo negro sacredly prohibited? What would it mean for us to dwell en el batey?

Yolanda is a two-time recipient of the Angela Current-Felder Women of Color Scholars scholarship of the United Methodist Church and a third-year doctoral scholar of the Hispanic Theological Initiative.