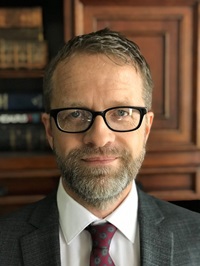 I specialize in early modern British literature (c. 1500-1680), and particularly in this literature’s engagements with contemporary history, religion, and politics. My 2007 book Liturgy and Literature is about the consequences of the English Reformation and the Book of Common Prayer for national and individual identity, and for later texts by Sidney, Shakespeare, Milton and Hobbes. My second book (Theology and Agency in Early Modern Literature, nominated for the Modern Language Association’s James Russell Lowell Prize) extends my prior interests in the dynamics of internal and external authority by addressing theological problems of agency—that is, the nature and limits of humans' capacity for autonomous will and action—in works by Marlowe, Shakespeare, Kyd, Donne and Milton, as well as theologians from Augustine to Calvin, and philosophers from the Stoics to Harry Frankfurt.

In my teaching, I like to spread myself around a bit. I teach Intro to Poetry, Intro to Drama and History of British Literature to the general university population; courses on epistemology, ethics, poetry and Shakespeare for the University Honors Program; upper level classes on Shakespeare, Renaissance poetry and drama, and Milton for English majors; and, for our Ph.D. program, seminars on agency, Reformation theology, early modern historiography and literary criticism.

What else do I do? I serve on graduate exam and dissertation committees, and on various departmental and university ones. I’m President of the SMU Faculty Senate for AY2019-20. I give talks on my research and teaching at national conferences. I advise undergrad and graduate students. I read and evaluate manuscripts for Cambridge, Routledge, Palgrave, Notre Dame and Penn. I teach at our graduate revision and publication workshop in Taos. I help our Ph.D.s find jobs. I cook, read, hike, play music with my family, pet my dog. All in all, a pretty good existence.