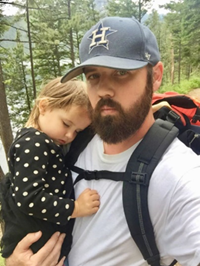 Ross Sloan grew up dividing time between Houston and Breckenridge, Texas, started at SMU as an incoming freshman in 1999, and after transferring out to Auburn University for a single year returned to The Hilltop to earn his MA in English and also a BA in History. He started teaching at SMU in 2009. The campus is his second home. He means to make a long career of it teaching Mustangs a thing or two (or ten) about writing and to continue in his capacity as the Assistant Director of Forensics and the coach of the SMU Speech Team. He has eight children and some common hobbies - hiking, fishing/hunting, reading, travel - as well as some uncommon hobbies, like beekeeping and collecting 1:4 scale statues of Marvel Comics characters. He has been doing research for and writing a book since 2007 but is being a perfectionist about it and just can't get the thing done to his satisfaction. He is nicer than he looks.

“The Devlin Award commemorates Laura Devlin, a first-year writing teacher distinguished for academic rigor, intellectual adventure, and human concern. This award for continuing excellence is presented annually to a full-time faculty member whose major teaching responsibility is in DISC.”

“An opportunity for students to celebrate faculty excellence and involvement in the student experience at SMU.”

Named “Best Professor” at SMU by The Daily Campus, 2016

This fall, SMU students celebrated the Year of the Faculty by honoring one professor per school as Peruna Profs, who are “the amazing, interesting, inspiring, exceptional, funny (or whatever adjective you choose) professors who you want to receive this once-in-a-lifetime opportunity.

“In recognition of your excellent teaching and support of those who learn differently.”

“A Dog’s Life: The Rwandan Genocide in the Graphic Novel Deogratias.” 2010

“’The Year It Became Obligatory to Wear the Veil’: Local Rhetoric as Record of Oppression in the Graphic Novels of Marjane Satrapi.” 2011

"All Vulgarity Is Of Course A Crime": Sex and Systemic Violence in From Hell.” 2012

“Inconstant Star: The Creation, Death, and Resurrection of Captain America.” 2013

“Expressing Myself Wordlessly”: The Image as Narrative and Revelation in David Small’s Stitches 2014

“The Stronger Sex: Sheena, Queen of the Jungle and Feminism in the Silver Age of Comics.” 2014

The American West in Literature and Film