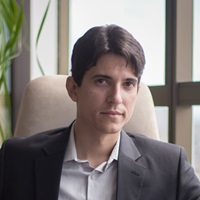 Euclides was born in Brazil and grew up in the city of Recife which is the fourth largest urban area in Brazil. It’s in the state of Pernambuco in norther Brazil. He attended the Federal University of Pernambuco (UFPE) where he received his B.Sc. and M.Sc. in Economics.

Texas is a great place for Euclides given his interest in country music and his hope of seeing a George Strait concert!