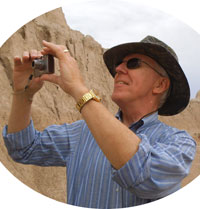 The solid Earth, atmosphere, liquid water and living organisms interact in surface and near-surface environments termed the "critical zone". These interactions occur on time scales that range from fractions of a second to hundreds of thousands of years or more. Our research on the stable istope geochemistry of the critical zone has included study of regolith minerals, continental paleoclimates, ancient biological activity, the hydrologic cycle, and modern and ancient atmospheric chemistry.

A Rusting Earth
The coexistence of abundant iron, liquid water, and free atmospheric oxygen on Earth is, as far as we know, unique in the modern solar system. In surface and near-surface environments, chemical weathering reactions that result from this remarkable association of materials commonly produce iron (III) oxide and oxyhydroxide minerals ("rusts"). On Earth, the two most abundant such "rusts" are goethite (a-FeOOH) and hematite (a-Fe2O3). Natural variations of the stable isotope ratios of structural oxygen and hydrogen in goethite indicate variations of ancient temperatures and isotopic compositions of waters, thus providing information on paleoclimates. In addition, all natural goethites analyzed thus far contain small amounts of an Fe(CO3)OH component in solid solution. Exchange experiments indicate that this Fe(CO3)OH component remains a closed system as long as the goethite structure remains intact. Therefore, the Fe(CO3)OH in goethite can preserve information on partial pressure and carbon isotope composition of CO2 in ancient environments of goethite crystallization.

Although goethite is extremely insoluble in oxidizing environments at values of pH characteristic of most low temperature terrestrial environments, research on modern systems indicates that there is apparently continuous, biologically-mediated dissolution and re-precipitation of goethite in active, wet, oxidized soils. Therefore, in active soil environments, pedogenic goethites are continually "updating" their isotopic record of soil conditions. Subsequent burial of the goethite can lock in this record of continental temperatures, rainfall, and atmospheric and soil CO2 pressures. These proxy records are found in goethites throughout much of the Phanerozoic. For example, data from a weathering system formed 440 million years ago indicate that the Earth's atmosphere contained about 16 times more CO2 than it does today, while the temperature in at least one wet, continental, tropical locale was about 23°C. The inferred value of the oxygen isotope ratio of ancient tropical waters suggests intense seasonal, perhaps monsoon-related, rainfall. Moreover, concentrations of the Fe(CO3)OH component in goethite from that Late Ordovician soil indicate that, even prior the widespread advent of vascular plants, there was significant biological activity on the continents. Vertical variations in the pedogenic goethite data suggest that fluxes of soil CO2 arising from biological activity (respiration) may have been comparable to those measured in modern, wet, tropical soils.

Mixing of CO2 from different sources in oxidizing surface and near-surface environments occurs as a consequence of a number of processes. The Fe(CO3)OH component in goethite can serve as a recorder of these processes in both vadose and phreatic groundwater systems. For example, formation of goethite as a consequence of pyrite oxidation in the presence of ambient limestone represents a circumstance in which mixing between the CO2 from "upstream soils" and CO2 from local dissolution of limestone is recorded by the Fe(CO3)OH component in the goethite. In principle, evolution of the pH in the system may be deduced from the pattern of variation of concentrations and carbon isotope ratios of the Fe(CO3)OH. Such a pattern appears to be present in goethites that were crystallized during the Late Cretaceous or Earliest Tertiary in the Lucero Mountains of New Mexico. Thus, aspects of the history of local groundwater chemistry and mixing processes may be constrained using the special properties of a common iron (III) oxyhydroxide.

Data from goethites in Paleozoic, Mesozoic, and Cenozoic systems pose questions about, and insights into: (1) the dynamics and energy balance of climates in the Earth's past, (2) the role of various boundary conditions in shaping those climates, and (3) local water and carbon cycles - including the role of biological activity.

The Interface between Lithosphere and Atmosphere
For the most part, terrestrial gastropods spend the active portions of their lives immediately at the interface between the solid Earth and the troposphere. Consequently, they can be important indicators of present and past conditions in this critical boundary layer. Our research has shown that the oxygen isotope composition of land snail shells is controlled by temperature, relative humidity, the oxygen isotope ratio of ambient water vapor, and the oxygen isotope ratio of rainwater present at the time of snail activity (i.e., the times of aragonitic shell formation). The stable carbon isotope ratios of land snail shells reflect the carbon isotope composition of plants used by the snails for food as well as the flux of carbon associated with normal snail metabolism. Therefore, the carbon isotope composition of these shells can record information on the relative importance of C3 versus C4photosynthesis in the ambient environment. Oxygen and carbon isotope data from modern land snail populations calibrate these paleoenvironmental indicators, which have been used to deduce changes in climatic conditions and vegetation in the Pleistocene and Holocene epochs.

Urban Atmospheric Carbon Dioxide
Outdoor CO2
Anthropogenic inputs of CO2 to the atmosphere are superimposed on natural cyclical inputs and outputs associated with soil/plant respiration, photosynthesis, and ocean-atmosphere exchange. The effects of all of these processes must be evaluated on large spatial scales to understand the overall global evolution of CO2 concentrations in the Earth's modern atmosphere. However, at the smaller spatial scales of "CO2 factories" (i.e., urban environments), it might be expected that anthropogenic inputs would dominate the local atmospheric CO2 budget in a relatively simple manner. Yet, measurements of outdoor CO2 in the midst of the Dallas metropolitan area indicate that, during warmer months, photosynthesis has a measurable influence and may, on occasion, locally dominate the CO2 flux balances. The local effects of this photosynthetic "complication" can be taken into account and separated from anthropogenic effects with combined measurements of the concentrations and stable carbon isotope ratios of atmospheric CO2. However, the complexities highlight the need for careful assessment of net photosynthetic carbon isotope fractionation factors in urban settings to enable more accurate assessments of relative magnitudes of natural and anthropogenic CO2 fluxes.
Indoor CO2
Work has also been performed on indoor air, for which the concentration and stable carbon isotope composition of CO2 is significantly influenced by the respiration of the occupants of the interior spaces. The study demonstrated that, even in indoor spaces with ventilation systems, the steady state concentration and carbon isotope ratio of CO2 from a single sample of the ambient indoor air, together with a single sample of CO2 from outdoor air, can be used to obtain a reasonable mass balance estimate of the average carbon isotope ratio of the respired CO2 in the room. Thus, such indoor spaces may function as "sample vessels" for determination of the proportion of C4-derived carbon in the average diet of the occupants of a room at the time of sampling.