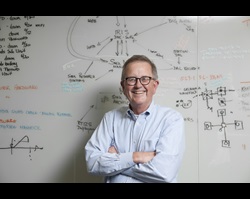 Brian Stump's primary research interests include seismic wave propagation in the near-source (hundreds of meters to tens of kilometers) and regional (hundreds of kilometers) distance ranges, seismic source theory and shallow geophysical site characterization. In addition, the interaction of politics with science is a topic of study primarily motivated by the role seismology plays in monitoring nuclear explosions.

Recent work has focused on characterization of explorations as sources of seismic waves. Studies have included the quantification of single fired nuclear and chemical explosions as well as milli-second delay fired explosions typical of those used in the mining industry. The spatial and temporal effects of mining explosions and their signature in regional waveforms has been of particular interest. This research has application to the monitoring of a Comprehensive Test Ban Treaty where even small explosions will have to be identified using their seismic signatures.

Combining different types of data sets in effective ways for resolving fundamental physical processes that generate seismic waves is a related research project. In the case of large, near-surface mining explosions, video images of the explosions in combination with ground motion and acoustic measurements can be used to quantify the importance of processes such as explosive shock, free face interaction and material cast in the generation of seismic waves. Ultimately, it is hoped that this research will provide the basis for using seismic waves as diagnostics of blasting proctices.

Moment tensor representations are used in both forward and inverse studies of explosion and earthquake sources. Application of these techniques utilizing synthetic Green's functions is being used int the comparative study of shperical and cylindrical explosive sources. Particular attention is being applied to separation of compressional and shear wave energy from these types of sources.

In all these investigations, experimentation plays a critical role. Explosions unlike earthquakes can be controlled and thus their time and location known prior to the event. This characteristic provides the opportunity to design and field experiments that include a variety of instrument types (ground motion, acoustic and video) that can be used for source resolution. Cooperative experiments with the US mining industry have and will continue to be invaluable in all our source studies.

Hayward, C., B. Stump and M. A. Lowery, 2002. Correlating Multi-Phenomenology Measurements with Blast Design in a Copper Mine, Proceedings of the Twenty-Eighth Annual Conference on Explosives and Blasting Techniques, Feb 10-12, 2002, Las Vegas, NV, International Society of Explosives Engineers, Vol. 1, p 305-314.