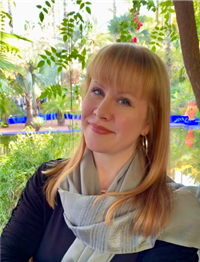 Dr. Heide Castaneda is an Associate Professor of Anthropology at the University of South Florida. Her research areas include political and legal anthropology, medical anthropology, borders, migration, and citizenship, focusing on the United States, Mexico, and Germany. For more information on her lecture, please click here for a copy of the flyer.

George McClelland Foster (1913-2006) and Mary LeCron Foster (1914-2001) earned their Ph.D. degrees at the University of California, Berkeley, in 1941 and 1965, respectively. For more than fifty years, they both made significant contributions to many fields in anthropology and linguistics. Although their travels and research encompassed the globe, their long-term field work focused on Mexico, especially the community of Tzintzuntzan.

Among George Foster's many influential works, the best known include: Empire's Children: The People of Tzintzuntzan (1948); Culture and Conquest: America's Spanish Heritage (1960); Traditional Cultures and the Impact of Technological Change (1962); Tzintzuntzan: Mexican Peasants in a Changing World (1967); Applied Anthropology (1969); Medical Anthropology (1978, with Barbara Anderson); Long Term Field Research in Social Anthropology (1979, co-edited with Elizabeth Colson, Thayer Scudder, and Robert V. Kemper); and Hippocrates' Latin American Legacy: Humoral Medicine in the New World (1994). For his work, he was elected to the National Academy of Sciences, received the Distinguished Service Award of the American Anthropological Association (for which he also served as President) and the Lifetime Achievement Award from the Society for Medical Anthropology, and was given the Malinowski Award by the Society for Applied Anthropology. In 1990, George Foster received the honorary degree Doctor of Humane Letters from SMU.

Mary Foster made significant contributions to linguistics and anthropology related to Mexican Indian languages, structuralism and symbolism, and international peace, including Sierra Popoluca Speech (1948, with George Foster) and The Tarascan Language (1969); Symbol as Sense (1980, co-edited with Stanley Brandes) and The Life of Symbols (1990, co-edited with L. Botscharow); Peace and War: Cross-Cultural Perspectives (1986, co-edited with Robert Rubinstein) and The Social Dynamics of Peace and Conflict (1988, co-edited with Robert Rubinstein). For her contributions, she received the 1987 Outstanding Achievement Award from the Society of Women Geographers.