Science at an Unprecedented Scale 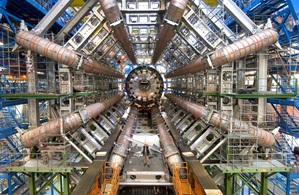 Maybe you’ve heard about CERN, the laboratory in Switzerland that has produced a wealth of scientific discoveries in recent years. Perhaps you’ve read about the Higgs boson, “God” particle, which increases our understanding of elementary particles matter, or the Large Hadron Collider (LHC), which can recreate the moments immediately following the Big Bang. What you may not have realized is the sheer scale of these projects. With over 3,000 active scientists and billions of dollars invested, CERN is the largest scientific collaboration in history, and Dedman College students and faculty are intimately involved in the process.

The amount of raw data produced with the LHC can be difficult to fathom. According to Dr. Ryszard Stroynowski, Chair of the SMU Physics Department, the ATLAS project at CERN can produce what equates to one billion CDs worth of data per second. It’s so much data, in fact, that it’s impossible to process all of the information. That’s where physicists’ ingenuity comes in. Standing eight stories tall, the ATLAS detector uses an advanced “trigger” to sift through the data and highlight the events worth recording. Even so, the data processing necessary is astronomical and requires hundreds of thousands of computers connected around the globe.

This is one of the areas where Dedman College graduate students make their mark. They also work on developments of new detection technologies, electronics for data transmission and collection and analysis of the data.

As Dr. Stroynowski says, “Students are working on the real frontier of science, with lasting consequences for physics sub-fields such as particle physics, astronomy, and cosmology.

Not only do students get to collaborate with other international groups at the largest science center in the world, but they also have the opportunity to make significant contributions to the ATLAS experiment and its evolution.

The benefits of student involvement at CERN do not end in Switzerland. Graduates have taken the experience and launched it into successful careers in a variety of industries. Some have stayed with physics; one former student now works in the Space Radiation Laboratory at NASA, and will have a major influence on the planning of future trips to Mars. Other graduates have recognized the increasingly data-driven world we live in and have capitalized on the experience gained at CERN, using the knowledge they gained to work in data analytics at insurance companies, AT&T, and even music streaming giant Spotify.


What’s next for CERN? It’s hard to say, as the benefits of the research may not be fully realized for 50 to 100 years. Such is the nature of scientific exploration. What is clear, however, is that the knowledge and experience gained by Dedman College students at CERN has set them up for a bright future.