Skip to main content
Office of Facilities Planning and Management

SMU's campus comprises many architecturally significant buildings organized among a beautifully landscaped setting which, over time, has successfully achieved an ageless style. Its Collegiate Georgian architectural style provides both a harmonious and traditional environment with unsurpassed beauty. It was Thomas Jefferson's design for the University of Virginia with architectural elements inspired by the Roman Pantheon that established President Robert Hyer's vision for the campus.

A Brief History of SMU by Marshall Terry contains the following essay about the first SMU president's choices:

The SMU story has to do with the growth of this original prairie college into a nationally recognized university in so short a time through the efforts of dedicated people who in one way or another shared SMU's vision. The one who brought this vision of a great university to be built on a sea of Johnson grass outside a young, still-frontier city in Texas was a research scientist and educator and SMU's founding president, Dr. Robert Stewart Hyer. Such was the scope of his belief in the future of this new university that he (as the story goes) chose for it the colors of Harvard and Yale and the Latin motto "veritas liberabit vos" - "the truth will make you free" - a Biblical quote that was echoed by Methodist leader Charles Wesley in his saying, "Let us unite those two so long divided, truth and vital piety.

Dr. Hyer also conceived a magnificent building in the style, no less, of Thomas Jefferson's University of Virginia to be the original home and forever the symbol of SMU. For a while, after the miracle of it being actually built, it would sit almost alone on the prairie campus and house the whole new university. Recognizing the early very real financial commitment of the city of Dallas to SMU, it would be named Dallas Hall. 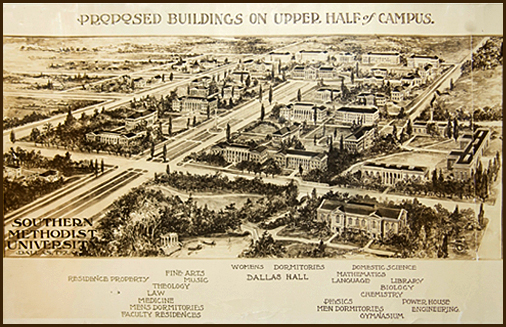