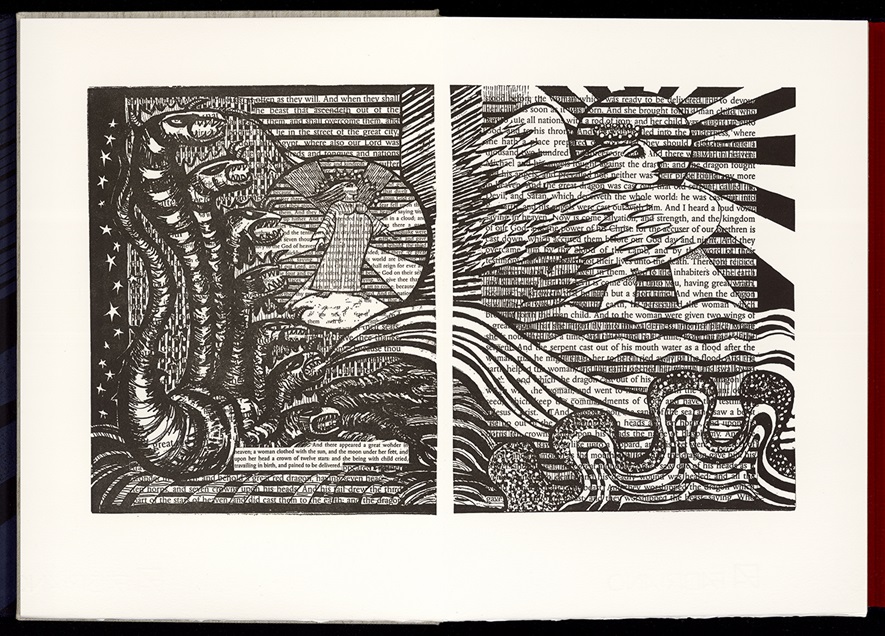 Text and image are entangled and merged in Natalie d’Arbeloff’s (born 1929) dramatic visual interpretation of the Book of Revelation. Thirty-eight black-and-white collages of drawings and computer-generated Columbus type were printed by Nicolas McDowall one-sided on sheets of Fabriano Rosaspina which are folded concertina-style, allowing images and text to flow into one another. The binding, which is built into a cloth-covered case inset with printed paper, was designed by d’Arbeloff and McDowall to open as a triptych, displaying a blockprinted portrait of Saint John, repeated on the cover and both front and rear paste-down end-papers.

Standing in stark contrast to the textual fidelity which Thomas James Cobden-Sanderson extolled at the beginning of the century, d’Arbeloff reifies Cobden-Sanderson’s concern about the submission of text to illustration. Yet, this bold endeavor seeks not to minimize Saint John’s message, but rather creates for the reader the prophet’s experience of the visions. An internationally-recognized painter, printmaker, and book artist, d’Arbeloff had already published forty-eight titles under the imprint of her own NdA Press, which she founded in 1974 by the time of this 1999 publication of the Old Stile Press.

Printed in an edition of one hundred fifty, this copy, given to the library by Decherd Turner, is number 25 and is signed by the artist.