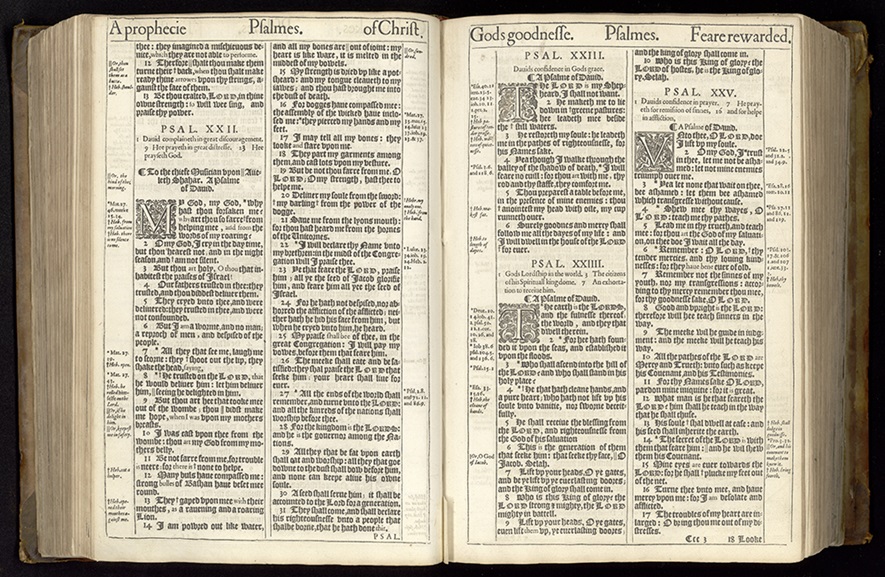 English Bible.
The Holy Bible, Conteyning the Old Testament, and the New: Newly Translated out of the Originall Tongues: & with the Former Translations Diligently Compared and Revised by his Majesties Speciall Comandement.
London: Robert Barker, 1611.
(00038)

The text created by the translators in 1611 has enjoyed four centuries of near-universal praise, despite or perhaps in part because its language has become increasingly archaic. Numerous familiar phrases come from this Bible, and its vocabulary and syntax have profoundly shaped English literature. The poetry of the King James Version speaks for itself: displayed is the text of the 23rd Psalm.

The King James Version remained the unchallenged English translation throughout the following three centuries; the text underwent serious revision only in the later nineteenth century. This 1611 translation also served as the basis for other landmark editions. It provided the source text for John Eliot’s “Indian Bible” of 1663, a translation into the indigenous Massachuset language that was the first Bible printed in the Americas. The first English Bible printed in the United States, Robert Aitken’s Philadelphia edition of 1782, was a King James Bible. As well when John Wesley published his Explanatory Notes upon the New Testament for his Methodist followers in 1755, he based his work on the King James Version.